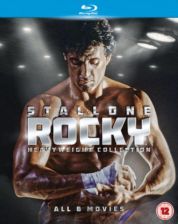 All six movies from the popular 'Rocky' franchise. In 'Rocky' (1976), club fighter Rocky Balboa (Sylvester Stallone) has hit rock bottom. Having turned 30, his boxing career is virtually over and he now makes a living collecting payments for a loan shark. Things start to look up when he begins dating Adrian (Talia Shire), sister of his friend Paulie (Burt Young). However, when world heavyweight champion Apollo Creed (Carl Weathers) decides to take on a 'nobody' in his title fight, Rocky finds himself chosen. Encouraged by his coach, Mickey (Burgess Meredith), he begins training for the big fight - much to Adrian's disapproval. In 'Rocky 2' (1979), Rocky's (Stallone) life returns to normality following his near loss to world heavyweight champion Apollo Creed (Weathers). Anxious to prove that Rocky's performance was a mere fluke, Creed offers him a big money rematch. Now unemployed and with a child on the way, Rocky has little option but to accept. In 'Rocky 3' (1982), now world champ and having enjoyed ten wins in three years, Rocky (Stallone) has become over-confident and complacent. He pays the price when he is humiliated in the ring by Clubber Price (Mr T), and this disaster is compounded when Rocky's trusted trainer Mickey (Meredith) dies. Determined to reclaim his reputation, Rocky unexpectedly turns to his old adversary Apollo Creed (Weathers) for help. In 'Rocky 4' (1985), Rocky (Stallone) heads to the Soviet Union after Russian boxer Drago (Dolph Lundgren) beats his friend and trainer Apollo Creed (Weathers) to death in the ring. However, will the Italian Stallion be able to vanquish a fighter whose punches can deliver a one tonne-per-square inch impact? In 'Rocky 5' (1990), robbed of his millions and brain-damaged after years in the ring, Rocky (Stallone) is forced to move back to his old neighbourhood. Rocky Junior (Sage Stallone) finds it difficult to adjust to these hard times, and feels further alienated when his father takes on a protege. In 'Rocky Balboa' (2006), Rocky (Stallone) is now a 50-something widower after the death of his beloved Adrian. His relationship with his son has also deteriorated and Rocky finds solace only in the stories he recounts to the customers who visit his deli. However, everything is about to change as a 'what if' debate emerges as to whether current champion Mason 'The Line' Dixon would have been able to beat Rocky in his prime. Nobody ever suspects that the match might actually happen, given the 30-year age difference. However, when Dixon's management sets up an exhibition fight, the gauntlet is well and truly thrown down and an enthusiastic Rocky grasps it with both hands. The Italian Stallion re-applies for his license, rounds up the old gang and sets off on the long journey to his long lost fitness and ability.