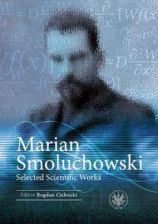 The year 2017 marks the 100th anniversary of premature death of Marian Smoluchowski, an outstanding Polish physicist, a pioneer of the kinetic theory of matter currently known as statistical physics. On this occasion, we have published the volume containing: >> essays on Smoluchowski’s life and his contribution to science, >> translations into English of Marian Smoluchowski’s papers originally published in German, French and Polish. Among them three extremely important articles have been prepared for the first time especially for this publication. • A Contribution to the Theory of Electric Endosmosis and a Few Related Phenomena. Smoluchowski received a remarkable result in this paper. He showed that under the thin double layer assumption, the fluid flow in such phenomena is independent of boundary shape. The paper was published in 1903 in Polish and French. • On the Kinetic Theory of the Brownian Molecular Motion and of Suspensions. The paper played a very important role in convincing scientists as to the validity of the kinetic theory of matter. This paper (published in 1906) was translated from the German original into English by Rudolf Schmitz from RWTH Aachen and Robert Jones from Queen Mary College University of London. • Molecular-Kinetic Theory of the Opalescence of Gases in the Critical State and a Few Related Phenomena. The same two physicists translated Marian Smoluchowski’s paper on critical opalescence published in German in 1908 (French and Polish versions appeared in 1907). Explaining this mysterious phenomenon, discovered at the end of the 19th century, was at the time a great challenge for scientists.*****Some of his [Marian Smoluchowski – ed. note] fundamental contributions concerned the role of statistical fluctuations in phenomena involving assemblies of particles, and confirmed their importance in explaining phenomena like the Brownian motion and opalescence. One might say that, before him, most studies were concerned with the thermodynamic variables representing the first means or expected values of the relevant random variables. Because it went further into an examination of the deviations and second moments, the work of Smoluchowski gave further confirmation to the reality of a kinetic picture of matter. Stanisław Ulam, Marian Smoluchowski and the Theory of Probabilities in Physics (Los Alamos Scientific Laboratory, Los Alamos, New Mexico, US, 1956)ISBN: 9788323528838Kod paskowy: 9788323528838Redakcja: Cichocki BogdanRok wydania: 2017Kod wydawcy: 20322Liczba stron: 186Oprawa: Miękka ze skrzydełkamiPKWiU: 58.11Format: 16.4x23.4Głębokość (mm): 11Waga: 0.32Języki: angielskiGrupa towarowa: Książka

Phagocytosis of Bacteria and Bacterial Pathogenicity